Putting the Summer Doldrums in the Rear-View Mirror: What’s Next for the Resource Sector

The end of summer is near. That means brokers, bankers and management teams are straggling back into the plush offices of downtown Vancouver and Toronto.

Many of them are coming back to smaller accounts and market caps than when they took off for their vacation homes.

The posterchild sectors of high risk capital in the first half of 2018 were the 3 C’s; Cannabis, Crypto and Cobalt. Today, crypto and cobalt stocks are heavily underwater.

Cannabis stock are trading at levels that make most stock market bubbles blush.

I’ve never been a big fan of the hype sectors.

Call me boring, old fashioned and value investor oriented. I don’t put millions of dollars into the pipedream of some market individual who is unblemished with success.

Tax Loss Selling Season is Upon Us

Investors that got overzealous in the crypto and cobalt markets are facing 70-80% losses. I wouldn’t be surprised to see those companies trade down to their cash per share valuation.

I don’t like it when people lose money in the market. It pains me.

It’s why here at Katusa Research we are extremely patient and selective in our investments.

What’s on the Radar at Katusa Research for the Next 4 Months?

Trump and Trade are the 2 most important influencers in the commodity markets today. Trump and Trade are fueling extreme instability in both the prices of the commodities themselves and those companies which produce it. This volatility is going to fuel a serious tax loss selling season, which is only going to make matters worse.

One my main outlooks for the year was a strong U.S. dollar.

I was two months early on my call, but it has certainly come to fruition. The emerging economies are and will continue to be extremely weak. I don’t see significant strength in emerging market currencies before year end.

In contrast, the economy and sentiment are looking strong and confident in the United States. Even though President Trump wants a weaker currency to remain competitive in global markets, the U.S. Dollar will remain the King of Currencies. 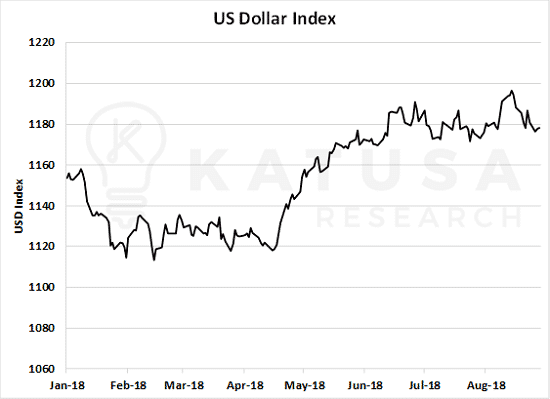 This is a trend I expect to continue: A strong U.S. dollar, and U.S. centric negotiating tactics by President Trump will result in the exact opposite of what Trump wants—that being the strongest currency.

Below is the performance of major commodities on a year to date basis, you’ll see the impact the 2 T’s (Trump and Trade) have had on the commodity sector… 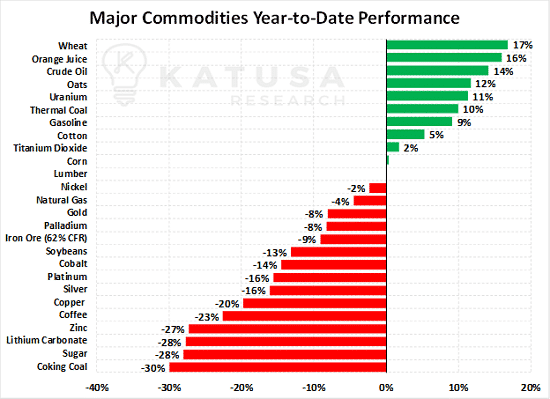 The base metal markets have been taking it on the chin all year, especially over the last few months. On a year-to-date basis, zinc is down 27% and copper is down 20%. The trade spat between the United States and China sparked fears that global growth would slow considerably.

Unsurprisingly, the Katusa Copper Producers Index has been getting crushed. The performance of physical copper along with large producers and mid-tier/small producer indices is shown below. 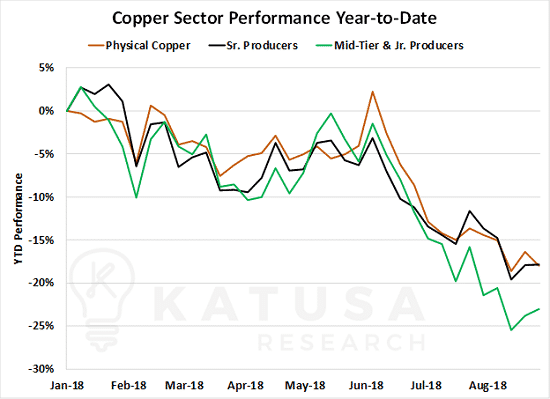 Fortunately for Katusa’s Resource Opportunities subscribers, we were invested in a company with a world class copper-gold project. It bucked the trend, and we recently sold it in the portfolio a few months ago for a 60% gain.

All That Glitters Isn’t Gold

The gold markets have not faired any better. Below are year-to-date results for physical bullion, senior producers and the mid-tier and junior indexes. 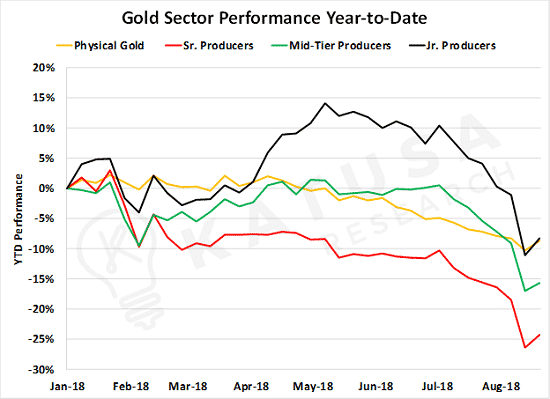 To keep my subscribers up to date between our monthly issues, I send out alerts to my subscribers keeping them informed on the volatility and outlaying my investment thesis.

We’ve assembled our watchlist and our now waiting for our prices to hit. I think we may get filled on our first tranche sooner than we think. But I don’t see gold going on a massive run anytime soon. I think we’ll see gold trade between $1,100 and $1,200 for the rest of the year.

Australian Gold Companies on our Radar 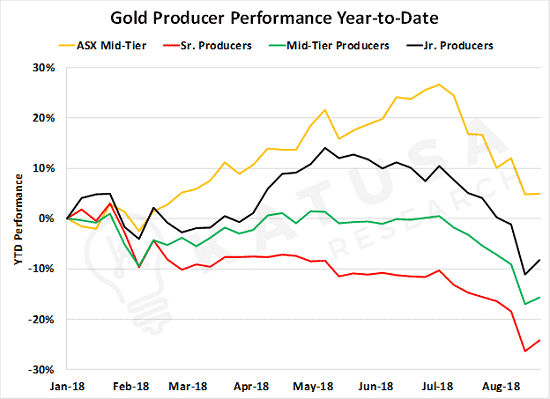 The Aussie gold producers should be looking for fodder here in North America by preying on the weak underperforming names.

Canadian resource projects are trading at a significant discount to their counterparts in Australia mainly because of the political risk now established in Canada under our weak federal government.

If I was a cashed up Australian miner, I would be on the next flight over and loading up on cheap gold reserves and production.

It is always my goal at Katusa Research to find the next big score. I pride myself on being able to see not where the ball is now, but where it is going in the future.

The best athletes in the world see how plays are going to develop before anyone else. Whether you’re a Payton Manning fan or Tom Brady fan, I’d say it’s hard to argue against saying both of them were exceptional at finding the exploitive play. And when they do, they capitalize on the opportunity for a big score.

I believe the Trump trade spat is creating some unique opportunities in certain undervalued sectors. One such sector is extremely hated and ripe for a massive bounce. It’s barely appeared in mainstream headlines (and we track them all). And you won’t hear about it in any other outlets. It’s not sexy, but it makes money (a LOT of it) and has tremendous upside.

And that’s why this company has my attention.

Katusa Research just published on one of the most undervalued under the radar producers that you have most likely never heard of. No other newsletter writer we know have has even mentioned this stock never mind actually published a full in-depth analysis KR style.

It’s a hated sector that’s seen more bankruptcies than most. Most people I talked to about this company didn’t even know it was a public company. I believe the protectionist moat that governments are placing around their industries will be very lucrative to this speculation.

This company is run by a world class management team that has put over $500 million of their own money into this venture to make it work.

If you’re a Katusa’s Resource Opportunities subscriber, you know exactly the company I’m talking about. And I think it will make a big splash in the next 6 months.

And if you’re not a subscriber, consider signing up to learn the name and incredible story behind this behemoth that’s about to take advantage of 2 of the 3 big T’s… Trump and Trade.

I believe I’m going to at least double my money with this pick and get paid along the way.

Cutting Edge ResearchDirect to Your Inbox

Leap Ahead of the Crowd